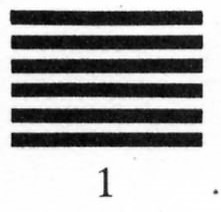 The first hexagram in the I Ching is commonly called “The Creative”.  Stephen Karcher refers to it as “Force”.  I don’t feel particularly drawn to the latter, so I will also refer to it as “The Creative”.

I find it intriguing that they began the Oracle with this particular hexagram, all yang (strong) lines.  It does make sense, through, in our way of thinking about things.  Yang represents heaven, and the active creation of all things.  So why not start at the beginning, with the thing that gave birth to all the other ten thousand things – according to Taoist philosophy?

This moment of complete “yangness”, if you will, is so unbalanced that it can exist for but a moment.  In the next moment, yin will begin to enter the picture.  This is one of the 12 hexagrams that corresponds to a time in the calendar, and this one is the summer solstice, when the day is longest (which is still not complete yang!).

If you were to throw this hexagram in answer to a question, it would be a very favorable answer, signaling to you that the creative force of the universe was available to you at that moment.  Everything about this hexagram denotes the creative, the upper and lower trigrams, the interior trigrams, all of it.  It’s pure energy.

But it’s not without its cautions.  Energy can create, but it can also destroy.  It must be used correctly.  A changing line at the first place indicates that the energy has not yet emerged, so it cannot be used.  A changing line in the sixth place indicates that the energy has been taken too far, and you are warned against arrogance and over ambition.  Changing lines in all the other places are favorable, speaking about various ways that the creative force will manifest itself and work in your favor.